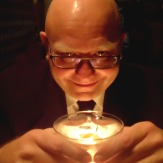 “From tonight, and for the rest of your life, whenever you hear the word ‘good,’ I want you to ask yourself, ‘Good for whom?’ And then check your wallet, because someone’s hand is reaching for it. The moralist is a thief, but he doesn’t have the guts to take your money openly like I do. He is a coward who tries to seduce you to rob yourself on his behalf.” – Jaguar Bennett

Jaguar Bennett has come to town with a one-hour seminar – actually a comic monologue – to save your life. Not your soul; his interests are spiritual, but very much of this world. As Bennett sees it, the morality of “good” people is killing the rest of us, and so “goodness,” far from a laudable goal, is actually a sucker’s game: if you’re not being wicked, you’re being oppressed. Hence his seminar title, How to Be Wicked: The Easy Course for Beginners.

Dressed in a business suit, speaking in a professional tone, the shaven-headed, lispy Bennett slings a revolutionary philosophy of his own concoction. It’s heavily influenced by Nietzsche’s Slave Revolt and Campaign against Morality arguments, in which the individual is victimized by larger, self-congratulatory social pressures until he learns to use those pretensions to his own benefit. Bennett says he’s partial to Max Stirner as well; that pre-Nietzschean firebrand’s theories of anarchic egoism definitely run through the Wickedargument. You may recognize some Machiavelli and De Sade in there, too. But really, while Bennett refers to himself by name as a proponent of these ideas, his tongue’s in his cheek. Sort of. Maybe.

Some of the delight of the stand-up philosopher school of comedy is in trying to figure out how much the writer/performer identifies with his in-character rap. After talking with Bennett, I’m assured that he’s very much aware of the absurdity of certain lengths of his argument here.

“‘Hurt’ is a word that people use for only one reason, to manipulate you into thinking that you are responsible for other people’s lives. You do what’s right for you. And if other people get injured in the process — well, it’s their responsibility to look out for what’s right for them…Another manipulation word is ‘disappointed.’…If there is even one person on this earth that you’re afraid to disappoint, you have given that person veto power of your entire life…I am the freest person I know. Why am I free? Because I have disappointed everyone who has ever depended on me.” – Ibid.

As a violent liberal, I am mildly discomfited occasionally to find overlap with the libertarians of whom I like to make sport. One area of common ground is the principle that whining, a claim of injury, does not in itself constitute actual injury. I think pussification is a social evil, and that catering to sensibilities is a dangerous contrast to the traditional catering of a free society: to person and property. So it is very nice to hear Bennett argue a similar thesis, as it is to hear him place “paying for a theater review” (he paid for this one) in the same context as other mock-outrageous conceits…that is, it’s nice until reflection makes me wonder whether it’s Jaguar Bennett, Social Critic, or Jaguar Bennett, Logical-Extreme Troll, or simply Jaguar Bennett, Character, who’s agreeing with me.

The same unsure footing one treads during this show at Zombie Joe’s Underground Fringe was walked-and-talked at a Hollywood Fringe Festival show that closed yesterday, Black Sheep, in which a performer embodied several characters outside the norm for their race and society. The insecurity of not knowing where one stands with the authors of a given piece is a wonderful function of in-your-face political theater. It’s good for me to have my feelings shaken up. It asks that I examine myself, if not objectively then at least from an alien perspective. It disallows complacency, as long as I play along; and if I don’t, I’m a bad citizen: close-minded, contemptuous without bothering to investigate. And not investigating one’s motivations is a crime against humanity; was it not inscribed at Delphi, as a maxim against believing one’s press: “Know thyself?”

“If there is just one thing you learn from this seminar, I want it to be this: Morality is neither true nor false, but useful. But because it is useful, morality is also dangerous…Morality can disarm your opponent or it can disarm you. Being moral does not make you safe — it makes you easy prey for others. Making other people be moral is what makes you safe, because then they are easy prey for you.” – Ibid.

For this monologue, which is more expertly written and performed than most I’ve seen at the rival Hollywood Fringe this year, we have to thank the thriving arts scene of Fresno, ranking metropolis of California’s San Joaquin Valley. Bennett worked this performance piece there, at Heather Parish’s theater The New Ensemble (Parish is also his director here) and at Fresno’s Rogue Festival, which celebrated its 14th annual run in March – making the 6-year-old Hollywood Fringe a relative upstart.

For my money (taken from Bennett’s pocket before I ever met him; that’s how accomplished an immoralist I am), I’d say Wicked‘s writing could use a judicious trim here and there – it felt just slightly repetitive a couple of times; five minutes, maybe, could go. Subtle it is not, except in its witty subversion: you can’t get lost. But it’s not long either, and never feels stale or blunt thanks to Bennett’s polished showman’s chops and well-considered style of presentation.

True, other than that suit and a well-chosen tie clasp, there’s nothing in the way of production values: against a black wall, a man stands and declaims. But that’s very much in keeping with what I’ve seen of the Zombie Joe aesthetic. It must be said that there’s really no “seminar” element, no give and take, no questions even. But I hate a PowerPoint presentation, so I was well pleased. As comic entertainment, it’s consistently clever and frequently laugh-out-loud funny. And as theatrical polemic, it’s gold. If you don’t walk out of Jaguar Bennett’s show arguing with your friends, you’re a sucker or a slave, indeed.

“Don’t use morality against yourself — wield it ruthlessly against everyone who would harm you. Make your enemies feel guilty, not you. Constrain them mercilessly, and let yourself be free. If you must be good, use your goodness wickedly!” – Ibid.

How to Be Wicked: The Easy Course for Beginners

Zombie Joe’s First Annual Underground Fringe, including productions of Urban Death, Othello, The Many Adventures of Don Juan, and Hellion Loop, runs throughout the month of June